There’s no substitute for a good night’s sleep – and Dreem knows it well. This small gadget, from one of Europe’s most promising digital health startups, can give you first-hand data on how to improve your sleeping. According to Dreem’s research, there are a few methods we can all try to get the most out of our rest. But with the help of this new, high-tech headset, the process becomes that bit dreemier.

Mercier & Brugière: They Had a Dreem

Rythm, the manufacturer of Dreem, was founded in Paris in 2014. The two engineers behind its creation, Hugo Mercier and Quentin Soulet de Brugière researched the topic of sleep and its health benefits in an effort to uncover a way in which it could be improved. Their research in pursuing a sleep-improving neurotechnology device raised considerable attention and funds – some €10 million from private investors and public grants. Then, only about a year into the process, they created the prototype for their product along with 10 patents in 2015.

The current version of the definitive headset created by Dreem is the Dreem 2. Released in 2017, the company stated that over 50 engineers worked on this improved version of the original, collaborating with famous neuroscientists such as Emmanuel Mignot, Christoph Koch and David Eagleman. But what is this device’s main function? And how can it actually improve our sleep?

How This Gadget Can Help You Dreem Easy 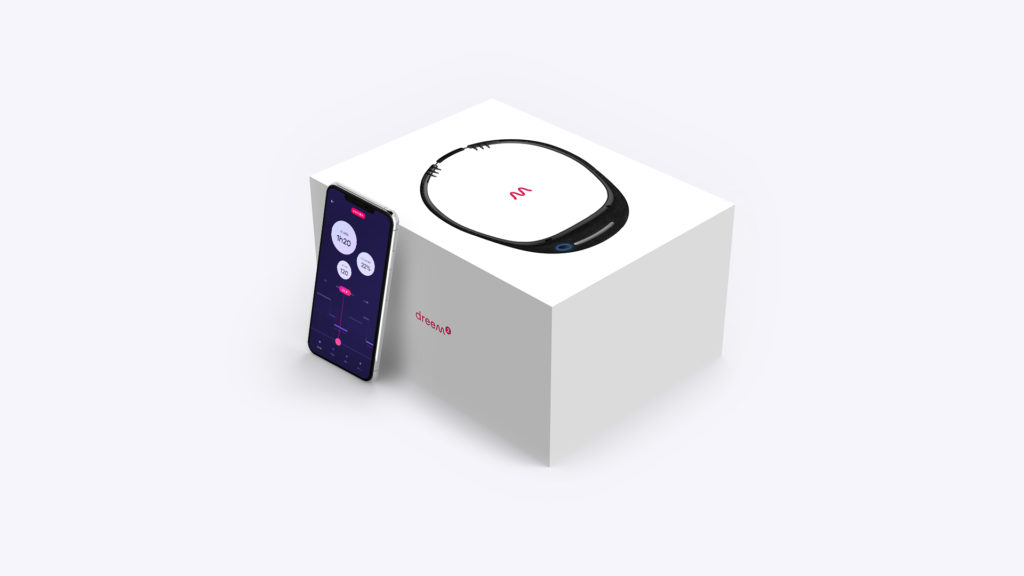 The main goal of Dreem is to give the user in-depth information on their sleeping patterns and how they can be improved. With a combination of its headset and app, Dreem’s wearable gadget measures psychological data such as your heart rate, respiratory rate and even brain waves. “The dry polymer EEG electrodes monitor the brain activity, and the bone-conducting audio devices transmit sound directly to the inner ear.” Though clinical studies have not been conducted and the Dreem headset is not a medical device, the startup claims that the device improves deep sleep by up to 32%. The combination of specific sounds at the right moments can help trigger deeper levels of sleep, enabling people to feel more rested even if they only get a few hours of shuteye.

The benefit of a device like Dreem, and the data it collects on its app, is that users can now receive detailed information on their behaviour without having to go to a sleep centre. At a sleep centre, patients would have to wait about an hour just for the study to get set up, then it could take even longer depending on how in-depth you’d like the study to be. That’s what makes this headset so unique. It’s the first time that people are able to get a full analysis on their sleep, along with a rundown on what impacts their ability to achieve deep sleep, such as external triggers, breathing, sleeping positions and more.

The headset itself has a clean, comfortable design, with a basic setup of simply putting it on when you go to bed and connecting it wirelessly to the app on your phone. You handle the sleeping, it handles the monitoring. Once you wake up in the morning, you check the app for your “night card” which provides information on your night’s sleep. The Dreem app also provides the option to customize what you’d like to work on and will ask questions to find out what needs improvement. As one of Europe’s most promising health startups, Dreem could be an answer for those seeking more rest in these troubling times.

InVRsion is seeking to transform the shopping experience in a time when it’s most needed. The Milan-based startup has just...
Read
Consumer Tech

Peanut is an inclusive social network for women to discuss fertility and motherhood, acting as an emotional companion throughout women’s...
Read
Consumer Tech

Back Market has created a marketplace to connect companies that restore used gadgets with consumers through a one-stop shopping experience,...
Read